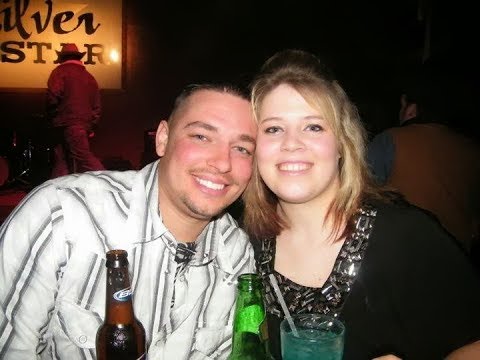 Brandon Lawson grew up in Crowley, Texas. When he was 16-years-old in high school, he met 15-year-old Ladessa Lofton. As soon as they met, they seemed destined for each other and have been together ever since, but like many relationships, there were rough patches. Nevertheless, the two always managed to work through the issues.

After high school, the couple lived in Fort Worth, Texas until early 2012 when they transitioned to San Angelo, Texas to start anew with their four children. By August 2013, life for the family had been going well, though they were dealing with normal eustress. They were still adjusting to their new living arrangements, and in order to provide for the family, Brandon proudly worked as an oil field worker for Renegade Oil Services–often working overtime hours. He had just been offered a better job and passed a drug test for it and was excited to start because the new hours he worked were better.

On the evening of Thursday, August 8, 2013, things were going seemingly well. Brandon had been away for the majority of the afternoon, but once he returned home he and Ladessa got into an argument — a typical spout most couples have at one point; brought upon by raising four children, one of whom was a newborn baby battling an ear infection, money, bills, and because Brandon didn’t come home the previous night. Staying out all night put a lot of worry and stress on Ladessa because she thought Brandon may have partaken in drugs — something he had trouble with in the past and dealt with a recent relapse.

After the quarrel, Brandon grabbed his keys, wallet, cell-phone, and wall-charger and decided to leave home at approximately 11:53 p.m. Although being low on gas, he called his father asking if he could stay with him for the night, despite his residence being three hours away in Crowley, Texas. His father, Brad, obliged but urged Brandon to reconsider and return home to mend things with Ladessa since it was late and a long exhausting drive. From that point forward, everything turns muddled (with a confusing timeline that doesn’t entirely make sense).

Seven minutes after Brandon left home, Ladessa called him to reconcile their differences. It’s unclear on what exactly was exchanged during the conversation, but Ladessa suggested that if he was still angry and didn’t want to come home, he should go to his brother’s home, who only lived five minutes away with his girlfriend Audrey and 4-year-old son, and spend the night there until everything had smoothed over. The discussion seemingly didn’t go as planned, because ten minutes later Ladessa called Brandon’s brother, Kyle, concerned for Brandon’s wellbeing, implying Brandon refused her notion.

At 12:10 a.m. Kyle proceeded to drive to Brandon’s home to check on Ladessa and the children. Things had simmered down by then and after a brief talk, Kyle returned home. Brandon placed two phone calls to Ladessa approximately twenty minutes later at 12:34 a.m. and 12:36 a.m. but she didn’t answer.

Two minutes later at 12:38 a.m. Brandon called his brother. He stated that his truck ran out of gas on Highway 277 near Bronte, Texas, and he needed assistance. A few minutes later Kyle called Ladessa and told her about the situation unfolding. She replied she would leave a gas can on the front porch for him to pick up because she was going to let her phone charge in her vehicle and to take a bath.

Subsequently, both Kyle and Audrey drive over to retrieve the gas can for Brandon at 12:45 a.m. Initially, Kyle planned to purchase the gas for him, but his paycheck hadn’t transferred into his bank account yet so the plan was to meet up and carhop to the nearest gas station, the Stripes Convenience Store, roughly five miles away from Brandon’s location. This is where things take a very confounding and unexpected turn that has yet to be explained.

Brandon: Yes, I’m in the middle of a field [Unintelligible – Escaped? We?] just pushed some guys over. We’re out here going towards Abilene on both sides. My truck ran out of gas. There’s one car here. A guy’s [chasing me?] through the woods. Please hurry!

Operator: Okay. Now run that by me one more …

Brandon: [Talking over the operator]: There’ll be no talking to ’em. I accidentally ran into ’em.

Operator: Oh, you ran into them? Okay.

Operator: Do you need an ambulance?

Brandon: Yeah! No, I need the cops.

Operator: Okay. Is anybody hurt?

From this point onward, Brandon doesn’t respond to the operator, but the background noise seems to get closer to the phone. It’s unknown what truly transpired, but things only continue to grow more baffling.

Four minutes after the phone call, a passing truck driver notices an abandoned pick-up truck with the license plate 76L-SY8 parked haphazardly on the highway and informs 911 about the issue.

When Kyle and Audrey arrive at Brandon’s pickup truck on the desolate stretch of highway twelve minutes later at 1:10 a.m., they are surprised to see Deputy Neal from the Coke County Sheriff’s Office, who arrived at the same time from the opposite direction for unbeknownst reasons to them. Both parties didn’t see any vehicles or suspicious activity on the highway on their way to Brandon’s truck.

At the time, Kyle and Audrey had no reason to be concerned for Brandon’s safety. They initially assumed he was hiding in nearby bushes because he had an outstanding warrant for an old drug charge for possession with the intent to deliver in Johnson County that resulted in a hefty fine that Brandon and Ladessa were saving up money to pay. As a result, they made several attempts to contact Brandon and finally managed to get ahold of him, unknowingly to Deputy Neal. Brandon promptly mentioned he was ten minutes away in a field and bleeding, and requested to get to him quickly. The signal soon faded away and the phone call ended. Immediately afterward at 1:19 a.m. Audrey texted Brandon saying, “Hey, bro, the cops are at your truck,” but he never responded. Believing things were still okay, Kyle told Deputy Neal he was on his way to deliver a gas can for Brandon because his truck ran out of gas, but wasn’t certain where Brandon had gone.

Meanwhile, Deputy Neal does a quick search of Brandon’s pick-up truck. Despite the odd positioning, there had been no damage dealt on the exterior, and all the doors were unlocked. Inside, the truck seats were empty, along with the keys and Brandon’s wallet. Due to the truck being parked unsafely, Neal turned on Brandon’s hazard lights, locked the doors, and ordered a tow to pick up the truck at 8:00 a.m. and proceeded to leave the scene without running Brandon’s license plate.

Once Deputy Neal was out of view, Kyle and Audrey tried contacting Brandon via cell phone but he never responded. Their worries started growing as they walked around shouting his name and drove slowly up and down the highway hoping to see him. Kyle eventually called a few acquaintances from work to help look for him but to no avail. They called off the search at 3:00 a.m. because Brandon’s cell phone had completely stopped ringing — indicating it had been shut off or had no battery power. Before leaving for home, Kyle put the gas can in the bed of Brandon’s truck just in case Brandon returned but he intended to return once the sun rose and his paycheck cleared.

On the way home, Kyle called Ladessa to inform her he couldn’t locate Brandon, but she didn’t get the message until 4:30 a.m. when she finally retrieved her phone from her vehicle. It was at that moment she noticed several missed phone calls from Brandon and Kyle. The fear began to sink in and she called the local police station at 5:00 a.m. to see if any updates had been made but there hadn’t been. Two hours later at 7:00 a.m. Kyle’s paycheck finally entered his bank account and he returned to Brandon’s truck to fill it up with gas. By 8:30 a.m. the truck was towed off, and since there hadn’t been any word from Brandon, Deputy Neal went back to Brandon’s last known whereabouts that afternoon to check nearby homes and land for possible signs of someone being in the area but he was unable to recover anything. 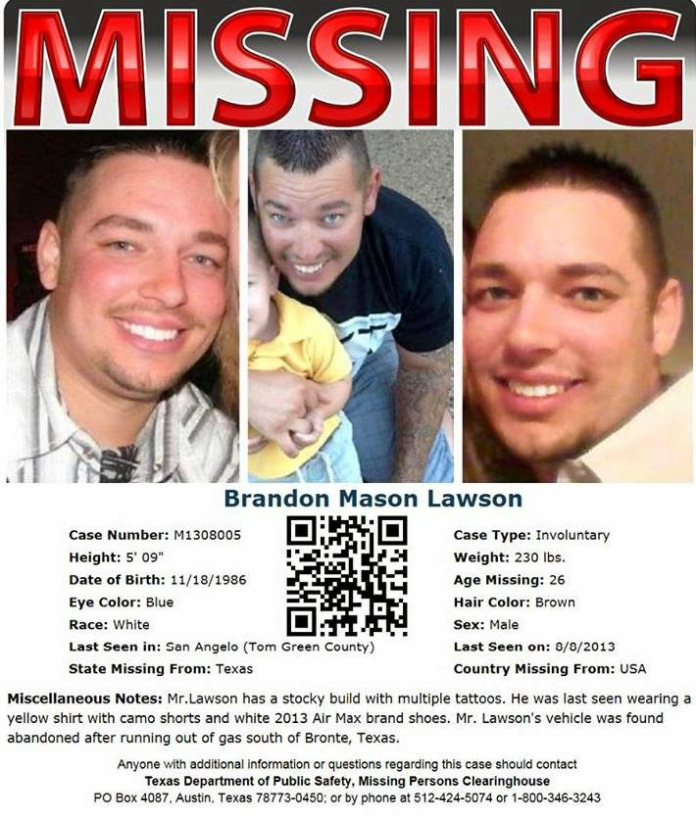 With a lack of contact from Brandon — something very uncharacteristic of him regardless of the circumstances — his family started to grow increasingly worried. Stricken with guilt, Kyle contacted the authorities and mentions the phone call Brandon made claiming he was bleeding while they were present with Deputy Neal. Notwithstanding, Brandon’s family were still unaware Brandon placed a distressed 911 phone call fifteen minutes before Kyle, Audrey, and Deputy Neal arrive at the scene.

They searched for him multiple other times, with no luck at all, his wife used all she had to even hire a private investigator. The cops did a search of the area as well, dogs the whole nine yards.

A few months after Brandon disappeared, Kyle Lawson was considered a suspect and was brought in for questioning. He was asked if he and his brother got into an argument, and whether or not he had injured Brandon in some fashion or had given him a lift to somewhere. Knowing where the investigators were heading in their questions, Kyle willingly asked for a polygraph test. Unsurprisingly, he passed with flying colors.

Since then, no updates have been made since Brandon’s initial disappearance. Many in law enforcement are still adamant that Brandon Lawson is not in Coke County, because if he was in the vicinity to where he disappeared he would have been located. At the time, the rough terrain was suffering from a drought and the water in the river had been very low. All of this, combined with the technology and equipment provided for multiple searches, leaves them believing Brandon is elsewhere.

Regardless of the lack of answers and updates, Brandon Lawson’s case is one that has attracted many various resources in the true crime genre on the Internet, including Redditors, podcasters, and blogs. People of these communities have rallied together to support the Lawson family and to share the case with others in order to perpetuate new eyes and ears.