The translation of Uruku/Utukku means “vampire that attack’s man.” By simply looking into the eyes of a Uruku/Utukku a human can be injured. It is said that the Uruku/Utukku haunt deserted places such as graveyards, mountains, and the seas. Uruku/Utukku are said to be similar to Ekimmu in their appearance (phantom, demon-like creatures).

These vampires are said to use sexual seduction to trap their victims, and then prey on them as they sleep. Both the succubi and incubi manifest mainly in dreams. Succubi is a female, incubi is a male. The church considered these vampires to be part of Satan’s army.

Lamashtu, in Mesopotamian religion, was the daughter of the sun-god Anu. Lamashtu was said to be the most terrible of all female demons. Lamashtu was also know by about 7 other names and was described as the 7 witches (see above, 7 demons). Lamashtu was said to have killed children, and drank the blood and eat the flesh of men. She also brought nightmare upon her victims, killed nature, contaminated water supplies, and caused miscarriages for pregnant women. 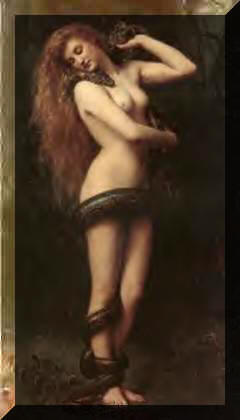 The legend of Lilith is rooted in Babylonian demonology. It is also argued that Lilith is a dark demigoddess similar to Hectate. As legend goes, Lilith is the 1st wife of Adam (the story of Adam and Eve). She disobeys her husband and is forever doomed to wander the earth as a demon. Lilith can shape shift and often hunts in the form of an owl. Her victims of choice were newborn children and pregnant women. Mesopotamian society also blamed Lilith for putting erotic dreams into the minds of men. Eventually, the Church added Lilith to the daemonic army of incubi and succubi who seduce and feed upon innocent, unknowing victims. 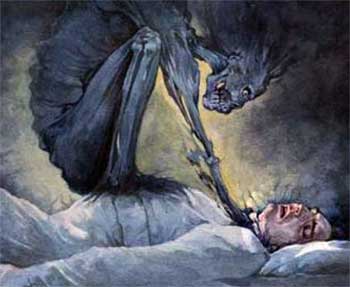 The vryolakas are corpses of a person who is possessed by a demon. They rise from their graves at night and knock on people’s front doors calling their names. If the person answered the door, they were doomed to die the next day. However, the vyrolakas could only call a person’s name one time. Many avoided death by waiting until someone called their name a second time to answer the door. Unlike stereotypical vampires, the vryolakas do not suck blood; when someone answered the door, the vryolaka condemned them to die with disease. This particular vampire legend was more prevalent in ancient Greece.