One of America’s most mysterious murders involves a commonplace, rural house in the unassuming town of Villisca, Iowa. In 1912, the Moore family lived here, including Josiah, his wife, and their four children. On the evening of June 10th, the family welcomed two of their children’s friends to stay the night – not knowing that they would all be dead by sunrise. Someone entered the Moore’s home in the wee hours and took an axe to every single person inside. After a neighbor discovered the gruesome crime, an investigation probed ties to then-Senator Frank F. Jones, a traveling minister, and a nameless highwayman seen roaming the town. None were convicted and the case remains open, but the house has become a hotel and museum open to those brave enough to enter.

The killings became known as the “Villisca Axe Murders,” and are easily the most notorious murders in Iowa history.

Legislation was written in response to the murder, including the establishment of the current State Bureau of Criminal Investigation’s predecessor.

The day of the murders the family spent most of it at church, just so happens those 2 other innocent children were involved since they wanted to stay over at the Moore’s home. These are the children of the Moore’s friends who trusted nothing would go wrong. 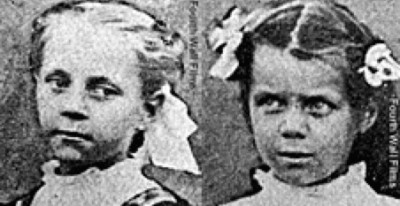 They walked the three blocks to their home. Cookies and milk ended the festive evening, and all went to bed.

Sometime after midnight, the killer or killers picked up Joe’s axe from the back yard, entered the house, and bludgeoned to death all eight of its occupants.

They have never found the culprit and maybe never will, either way lock your doors tonight.