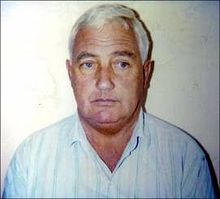 An English-born Australian serial killer, John Wayne Glover was known for praying on elderly women, including the widow of artist Will Ashton. Over the span of 14 months, between 1989 and 1990, Glover murdered six elderly women after brutally attacking them. At times, he used simply his fists to attack his victims; with others, he used objects like hammers, his victims’ pantyhose, and other instruments.

Many of his victims were simply women he saw walking past him on the street with whom he struck up casual conversation. In addition to attacking and murdering those six women, Glover was also accused of molesting and sexually assaulting several other elderly women.

At his trial, a psychologist noted that while Glover was sane, he had a severe personality disorder, which may or may not have been connected to his turbulent relationships with his mother and mother-in-law. After being found guilty and sentenced to prison, Glover killed himself in 2005. Days before he died, he handed his last visitor a picture he had drawn featuring two trees and the number 9. Supposedly, nine is the true number of murders Glover was responsible for, not merely the six for which he was convicted.