The “Red Lady” of Huntingdon College in Montgomery has changed a lot over the centuries. What was once a benevolent, yet inquisitive, Lady in Red, who quietly roamed a residence hall transformed over the years to a rather vindictive apparition who evokes fear and apprehension from those she visits.

The story began when Huntingdon College was located in Tuskegee, where the school was chartered and established as Tuskegee Women’s College in 1854. One night after “lights out” the girls on the upper floor of the residence hall, Sky Alley, noticed a glowing red light emerging through the cracks under their doors. The curious dorm residents peeked from their doorways to witness an ethereal lady in an exquisite red gown, carrying a red parasol gliding up and down the corridor. The apparition radiated a red light and seemed oblivious to the onlookers. She maintained a forward stare and continued her patrol of the hallway until daybreak.

The terrified students were never again quite at ease as night fell each evening – never sure if the ghost would return. She never did, however, and there was never any satisfactory explanation for her appearance.When the campus was relocated to Montgomery in 1910, the school was renamed the Woman’s College of Alabama. The Red Lady was a thing of the past – left behind with the building she haunted in Tuskegee. Until, that is, a young girl called Martha by some or Margaret by others, moved to campus.

Martha was born to a wealthy family in New York. Her parents were both natives of Alabama and Martha’s father left specific instructions in his will that Martha was to attend his mother’s alma mater of Huntingdon (which had been located in Tuskegee at the time). So, while she did not want to leave her New York home, Martha complied with the wishes of her father, feeling she had no other choice.

Martha’s arrival on campus drew immediate notice from her fellow classmates as she had a particular fondness for the color red, which she displayed proudly in everything from her choice of clothing to the décor in her fourth floor room in Pratt Hall. Her bedspread, her rug and even her accessories were all red.

Always an outsider on campus, Martha did not make friends easily. Some might even say she actively discouraged her classmates whenever they attempted to befriend her. She was, after all, a New Yorker at heart, maybe she just didn’t want to be in Alabama.

So, whatever the reason, she was a very unhappy girl with no friends on campus. Her sullen, cool demeanor made it hard for her to keep roommates. Her gloom seemed to permeate the room, no one wanted to be her roommate.

As the weeks passed and no roommate for Martha could be found, the president of Pratt Hall agreed to give it a try. After a concerted effort to befriend the lonely girl, she too was overwhelmed by the morose atmosphere and decided to leave before she, too, became despondent.

Martha entered the room just as the president was preparing to leave. Overcome by the rejection of the only friend she believed she had on campus, Martha bitterly warned her that she would regret her decision to move out.

Soon, no one on in Pratt Hall could stand to be in the same room with Martha. Her presence seemed to cast a chill upon the room and anyone there would soon find an excuse to leave.

The intense isolation seemed to drive a bit mad. She began roaming the dormitory hall after “lights out” randomly opening doors of her hall mates casting blank stares into their rooms and patrolling the hall as if in a trance.

One evening, after Martha had failed to attend any of her classes and had not been seen at any meals, her former roommate and dorm president decided to check on her. As she neared the girl’s room at the end of the corridor, she noticed a strange red glow emanating from Martha’s transom. Upon opening the door, she found Martha, dressed in a red robe and cloaked in her red bedspread, lying on the floor in a pool of blood. Martha had slashed her wrists.

To this day, it is said that Martha remains on the fourth floor of Pratt Hall. Generations of Huntingdon students have claimed to have witnessed the ghostly Red Lady making her way up and down the hall. Students claim that on the anniversary of Martha’s death, the spooky activities seem to increase. Her ghost always appears on that night and the strange red light glows from her former room, although the building is no longer a dormitory.

Why does she stay here and freak people out? Is There 1 red lady or 2? Maybe the school doesn’t need to ever use that dorm ever. We may never know. But I have myself have heard plenty of stories about this creepy place.

If you would like to visit Pratt Hall, and perhaps catch a glimpse of the Lady herself, the building is located at the center of campus, adjacent to Flowers Hall. 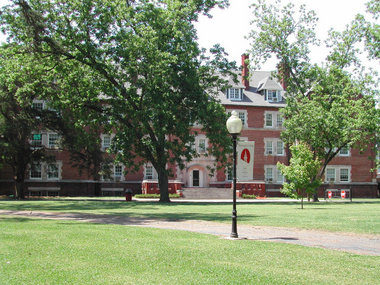