Mather was born in Boston, Massachusetts Bay Colony, the son of Maria (née Cotton) and Increase Mather, and grandson of both John Cotton and Richard Mather, all also prominent Puritan ministers. Mather was named after his maternal grandfather John Cotton. He attended Boston Latin School, where his name was posthumously added to its Hall of Fame, and graduated from Harvard in 1678 at age 15. After completing his post-graduate work, he joined his father as assistant pastor of Boston’s original North Church (not to be confused with the Anglican/Episcopal Old North Church of Paul Revere). In 1685, Mather assumed full responsibilities as pastor of the church. 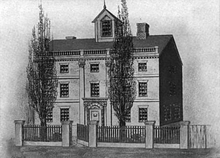 Mather wrote more than 450 books and pamphlets, and his ubiquitous literary works made him one of the most influential religious leaders in America. He set the moral tone in the colonies, and sounded the call for second- and third-generation Puritans to return to the theological roots of Puritanism, whose parents had left England for the New England colonies of North America. The most important of these was Magnalia Christi Americana (1702) which comprises seven distinct books, many of which depict biographical and historical narratives

Mather influenced early American science. In 1716, he conducted one of the first recorded experiments with plant hybridization because of observations of corn varieties. This observation was memorialized in a letter to his friend James Petiver.

In November 1713, Mather’s wife, newborn twins, and two-year-old daughter all succumbed during a measles epidemic. He was twice widowed, and only two of his 15 children survived him; he died on the day after his 65th birthday and was buried on Copp’s Hill, near Old North Church.

Mather’s relationship with his father Increase Mather is thought by some to have been strained and difficult. Increase was a pastor of the North Square Church and president of Harvard College; he led an accomplished life. Despite Cotton’s efforts, he never became quite as well known and successful in politics as his father. He did surpass his father’s output as a writer, writing more than 400 books. One of the most public displays of their strained relationship emerged during the witch trials, which Increase Mather reportedly did not support.

In 1689, Mather published Memorable Providences detailing the supposed afflictions of several children in the Goodwin family in Boston. Catholic washerwoman Goody Glover was convicted of witchcraft and executed in this case. Mather had a prominent role in this case. Besides praying for the children, which also included fasting and meditation, he would also observe and record their activities. The children were subject to hysterical fits, which he detailed in Memorable Providences. In his book, Mather argued that since there are witches and devils, there are “immortal souls.” He also claimed that witches appear spectrally as themselves. He opposed any natural explanations for the fits, he believed that people who confessed to using witchcraft were sane, he warned against performing magic due to its connection with the devil and he argued that spectral evidence should not be used as evidence for witchcraft. Robert Calef was a contemporary of Mather and critical of him, and he considered this book responsible for laying the groundwork for the Salem witch trials three years later:

Nineteenth-century historian Charles Wentworth Upham shared the view that the afflicted in Salem were imitating the Goodwin children, but he put the blame on both Cotton and his father Increase Mather.

Mather was influential in the construction of the court for the trials from the beginning. Sir William Phips, governor of the newly chartered Province of Massachusetts Bay, appointed his lieutenant governor, William Stoughton, as head of a special witchcraft tribunal and then as chief justice of the colonial courts, where he presided over the witch trials. According to George Bancroft, Mather had been influential in gaining the politically unpopular Stoughton his appointment as lieutenant governor under Phips through the intervention of Mather’s own politically powerful father, Increase. “Intercession had been made by Cotton Mather for the advancement of Stoughton, a man of cold affections, proud, self-willed and covetous of distinction.” Apparently Mather saw in Stoughton, a bachelor who had never wed, an ally for church-related matters. Bancroft quotes Mather’s reaction to Stoughton’s appointment as follows:

“The time for a favor is come”, exulted Cotton Mather; “Yea, the set time is come.”

Mather claimed not to have attended the trials in Salem (although his father attended the trial of George Burroughs). His contemporaries Calef and Thomas Brattle place him at the executions (see below). Mather began to publicize and celebrate the trials well before they were put to an end: “If in the midst of the many Dissatisfaction among us, the publication of these Trials may promote such a pious Thankfulness unto God, for Justice being so far executed among us, I shall Re-joyce that God is Glorified.” Mather called himself a historian not an advocate but, according to one modern writer, his writing largely presumes the guilt of the accused and includes such comments as calling Martha Carrier “a rampant hag”. Mather referred to George Burroughs as a “very puny man” whose “tergiversations, contradictions, and falsehoods” made his testimony not “worth considering