On April 11, 1981, 36-year-old Glenna “Sue” Sharp, her 15-year-old son John and his 17-year-old friend Dana Wingate were murdered in Cabin 28 at the Keddie Resort, in Keddie, California. It was discovered later that 12-year-old Tina Sharp was missing. Her remains surfaced year’s later. 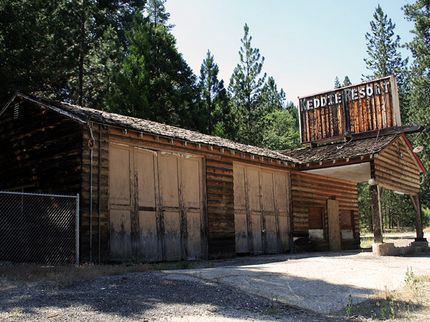 On the evening of April 11, 1981, Sue had given the okay for Ricky and Greg to have their friend, 12-year-old Justin Eason, over to spend the night. Justin was also relatively new to Keddie. He had been living in Montana with his father, but moved in with his mother and stepfather, Marilyn and Martin Smartt, in November 1980.

The Smartts lived in Cabin 26, which was just a short distance from the Sharp’s cabin. Letting Justin spend the night would not be a problem, but if it became one, Sue knew she could always send him home. Plus the house was fairly empty. Sheila had plans to go to a sleepover at a friends house. John and his friend, 17-year-old Dana Wingate, were going to Quincy that night, then coming back to hang out in John’s bedroom in the basement. Tina was over in Cabin 27 watching television, but came home around 10 p.m.

The following morning Sheila Sharp returned home at around 7:45 a.m. As she opened the door, she immediately noticed an offensive odor that seemed to engulf the room. When she stepped into the living room, it took her mind a moment to comprehend what her eyes were seeing.

Her brother John appeared to be bound and lying on his back on the living room floor. There was blood caked around his neck and face. Next to John was a boy, bound and lying face down. It appeared that the boy and John were tied together at their feet. Her eyes then landed on a yellow blanket that was covering what looked like a body. Gripped by fear, Sheila ran to the neighbors while screaming for help.

The investigation into the murders was initially handled by the Plumas County Sheriff’s Office. From the start, the investigation was riddled with errors and oversights.

To begin with, the crime scene was never properly secured. Even more astounding was the amount of time that it took for the police to realize that Tina Sharp was missing. When the first police officers arrived at the scene, Justin Eason tried to tell them that Tina was missing, but they ignored what the boy was saying. It wasn’t until hours later that everyone realized that the 12-year-old daughter of the murdered woman was gone.

Each victim had been bound with several feet of medical tape and electrical appliance wires removed from appliances in the home and extension cords. There was no medical tape at home before the murders, indicating that one of the attackers brought it in to help bind the victims.

An examination of the victims was conducted. Sue Sharp’s lifeless body was found under the yellow blanket. She was wearing a robe, and her underwear had been removed and forced into her mouth. Also in her mouth was a ball of tape.

The underwear and tape were held in place with an extension cord that was also tied around her legs and ankles. Both Sue and John Sharp had been beaten with a claw hammer and stabbed multiple times in their bodies and throat. Dana Wingate was also beaten, but with a different hammer. He had been strangled to death.

There was considerable blood on the living room floor and drops of blood on Tina’s bed. The investigation pointed to rape as the motivation behind kidnapping Tina instead of murdering her in the home with the others.

More evidence found included a bloody footprint that was discovered in the yard and knife marks in some of the walls of the home.

While the brutal attacks inside Cabin 28 were going on, Sue’s sons Ricky and Greg and their friend Justin Eason were sleeping undisturbed in the boys’ bedroom. The boys were found unharmed in the room the following morning after the murders.

A woman and her boyfriend, who were in the cabin next door to the Sharp’s cabin, woke up at around 1:30 a.m. by what they described as muffled screams. The sound was so disturbing that the couple got up and looked around. When they were unable to determine where the screams were coming from, they went back to bed.

It seems impossible that screams woke the neighbors, but did not disturb the boys that were in the same house where the screams originated. Also perplexing, is why the killers chose not to harm the boys when any one of them could have been pretending to be asleep and later identified the perpetrators. How did the boys not here this all happening? I don’t know. Whatever the reason be, the boys got lucky and are lucky to be alive.

The Plumas County Sheriff’s Office questioned anyone who could have heard or witnessed something that could help solve the case. Among those that they interviewed was Sharp’s neighbor and Justin Eason’s stepfather, Martin Smartt. What he told investigators made him a prime suspect in the crime. A lot of Conspiracies and theories have told. Martin was looked at and with only circumstantial evidence they knew it wouldn’t go anywhere in court.

Boubede returned to Chicago and scammed several police officers out of money, but he was caught and almost did prison time, but died before he got the chance.

In 1984, the cranium part of a skull was found about 30 miles from Keddie. Several months later an anonymous caller told the Butte County Sheriff’s office that the skull belonged to Tina Sharp. Another search of the area was made, and a jawbone and several other bones were found. Testing confirmed that the bones belonged to Tina Sharp.

Martin Smartt died in 2000, and not long after his death, his therapist told the Plumas County Sheriff’s Office that Smartt had confessed to him that he killed Sue Sharp because she was trying to convince Marilyn to leave him. Smartt never mentioned who killed John, Dana or Tina. He also told the therapist that it was easy to beat the polygraph and that he and Plumas County Sheriff Doug Thomas were friends and one time he let Thomas move in with him.

On March 24, 2016, a hammer was found that that matches the description of the hammer that Marty Smartt claimed was missing two days after the murders. According to Plumas County Sheriff Hagwood, “the location it was found… It would have been intentionally put there. It would not have been accidentally misplaced.”

Bottom line is that this case was never officially solved.. We may never really know who did these awful murders.