Skip to content
How the Historic Persecution of Witches Led to the Infamous Salem Witchcraft Trials
Ireland 1324. The bishop of Ossory, Richard Ledrede, condemns his diocese as a hotbed of devil worshippers. At the centre of this scandal is Dame Alice Kyteler, a wealthy noblewoman, accused of being a witch by her step-children.

Alice and her followers had a multitude of charges levelled against them, chiefly the malicious murder of her fourth husband by means of poison and sorcery. In other words, witchcraft. In addition, she was accused of holding secret nocturnal meetings in churches to perform black magic, including the brewing of love potions; of mutilating live animals at crossroads as offerings to demons; and, of engaging in sexual intercourse with her demonic familiar.

Alice would be tried and found guilty, becoming the first recorded person to be condemned as a witch. Although Alice herself would flee the country in time, one of her female servants was flogged and burned at the stake in the November of that year.

In the decades that followed, fear of malevolent witches spread across Western Europe like wildfire. Believed to be agents of the devil, widespread belief regarded them as enemies of the Christian Community.

The Papacy’s response to witchcraft

On 5th December 1484, Pope Innocent VIII issued a Papal Bull which denounced the actions of those who “give themselves over to devils male and female, and by their incantations, charms, and conjurings” commit heresy, “spreading their infection to the ruin of others who are innocent”. The decree gave inquisitors a blank cheque to persecute those believed to be witches “freely and fully”, “according to their deserts”.

Within just three years of the Bull’s publication, the Catholic clergyman Heinrich Kramer published Malleus Maleficarum, the Hammer of Witches. The text advocated the complete extermination of witches. Using legal justification, Malleus recommended the use of torture to extract confessions of sorcery if tamer methods of interrogation proved unsuccessful. The text also promoted deception as a method to obtain confessions.

“And when the implements of torture have been prepared, the judge, both in person and through other good men zealous in the faith, tries to persuade the prisoner to confess the truth freely; but, if he will not confess, he bid attendants make the prisoner fast to the strappado or some other implement of torture. The attendants obey forthwith, yet with feigned agitation. Then, at the prayer of some of those present, the prisoner is loosed again and is taken aside and once more persuaded to confess, being led to believe that he will in that case not be put to death.” 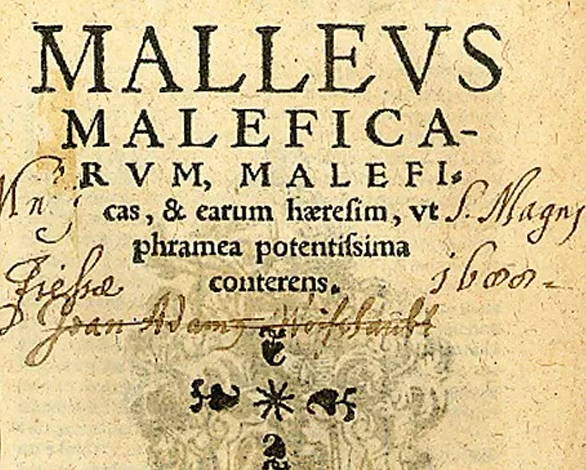 Despite its shocking contents, after being published in Germany, Malleus Maleficarum became an instant bestseller, and proliferated into dozens of editions throughout Europe. Astonishingly, for almost 200 years it was second only to the Bible in sales.

By the 16th century, the threat of Satanic witches circulated freely in academic discourse. In 1597, the renowned intellect King James VI of Scotland – future James I of England – published a philosophical dissertation on necromancy and black magic. Intending to educate a misinformed public on the origins, practices and implications of dark sorcery, James’ Daemonologie outlined the necessity of practising witch-hunting in a Christian society. In his Preface he stated his conscience had moved him to warn of the dangers of the Devil’s power and those who aligned themselves with his works.

The fearefull aboundinge at this time in this countrie, of these detestable slaves of the Devil, the Witches or enchanters, hath moved me (beloved reader) to dispatch in post, this following treatise of mine […]to resolve the doubting […] both that such assaults of Satan are most certainly practiced, and that the instrument thereof merits most severely to be punished. – King James VI of Scotland (and later I of England). Daemonologie. 1597.

And, certainly, on the ground, people were not only believing the threat of witches, but were acting upon the recommendations of authors such as King James and Heinrich Kramer. Often referred to as “The Burning Times”, the period between 1580 and 1662 saw a peak in the number of people being burned as witches in continental Europe and Scotland. For England and its colonies in North America, death by hanging was the choice method of execution for those found guilty of witchcraft.

Evidence of the increasing acceptance of the threat of witches can be found in the career of Matthew Hopkins, the self-styled Witchfinder General. Although only active between 1644 and 1647, some have estimated that Hopkins and his associates were responsible for more people being hanged for witchcraft in England than in the previous 100 years. Approximations place the death toll at around 300.

Hopkins was also responsible for The Discovery of Witches, a handbook which took much inspiration from the Daemonologie of King James. Although torture was illegal in England at this time, Hopkins – like Kramer before him – advocated severe methods of interrogation. He was known to have used sleep deprivation to extract confessions. This, however, was one of the Witchfinder’s kinder methods. Cutting into the skin with a blunt knife to see whether the accused would bleed, as well as the infamous method of tying a woman to a chair and throwing her into water, were both commonly used by Hopkins. The swimming test was based on the idea that as witches had renounced their baptism, water would reject them: those who floated were witches; those who drowned were innocent.

Such methods outlined in The Discovery of Witches would become popular in the English colonies in the decades which followed. 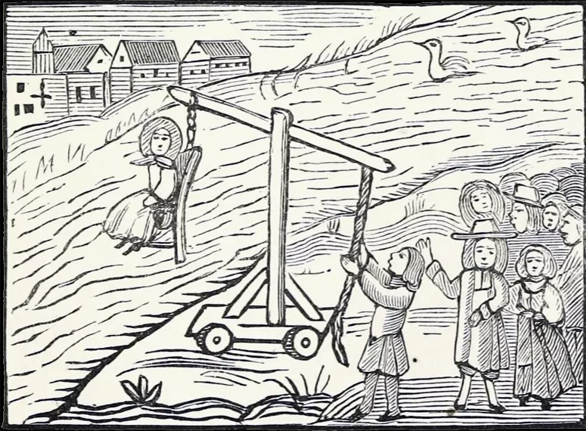 Were all witches women?

Although there was no ‘average’ witch, most of those found guilty would be poor and elderly. Approximately seventy-five percent were women.

Indeed, on 11th July 1629, on the Franco-German border, not far from the city of Strasbourg, an elderly woman was arrested, accused of “child murder and witchcraft”. It was her grandson who the old woman was accused of killing by poisoning his soup. Despite being tortured numerous times, the unfortunate woman never confessed to murderous witchcraft. Regardless, the suspicions of the court were strong. Although her eventual fate is lost to the records of history, it is highly likely that she was executed as a witch. Such was the violent destiny of many in this period.

Whilst men were convicted as witches, women were more likely to find themselves strapped to a burning stake or caught in the hangman’s noose.

Alongside literature on the increasing threat of sorcery, discourses of the depraved state of women were in circulation. Published posthumously in 1618, the University of Cambridge theologian William Perkins’ Discourse on the Damned Art of Witchcraft stated that “the woman being the weaker sex, is sooner entangled by the devil’s illusions with this damnable art than the man”. Another tract, by a different author, debated that women must “spring from the Devil”, for their “heads, hands, hearts, minds and souls are evil”.

Undoubtedly, the charges levelled against those accused of being witches are almost impossible to verify. Who is to say whether or not Alice Kyteler sacrificed animals at Irish crossroads, or if an unfortunate grandmother was responsible for the malignant poisoning of a grandchild? All that is certain is that people believed in what they were doing. Indeed, many suspected witches were killed outside of the scrutiny of law, at the hands of crowds. Such lynchings were not the result of a lust for personal vengeance – quite the opposite. Mob justice sought to serve and protect the public. That is to say, in Early Modern Europe, many communities harboured genuine fears that Satanic witches would bring pain and suffering upon themselves and their families.

One case from Denmark, as late as 1800, saw Anna Klemens, an 82-year-old-beggar woman apprehended by angry villagers, who believed her to be a witch. The one said to have instigated the lynching was a supposed “wise woman”, who ordered the crowd to beat the blood from the helpless old woman. At the time, it was thought that magic left the body of the witch once her blood was spilled, making it the only way to break her power. So convinced of her guilt were the villagers, that Anna was beaten to death.