Friday, September 14, 2007 was the last day Kevin Gosden would ever see his son.

“The night before Andrew went missing,” says Kevin, “we lay on the floor and did a jigsaw puzzle. It was an entirely unremarkable evening. We played games and did arts and crafts stuff with the kids a lot, ever since they were little. It’s just what we did that night…”

Here’s what is known about Andrew’s disappearance. On the last day his family saw him, Andrew woke late. He seemed irritable. His family says this was out of character. He left the house at 8:05 AM. Then, instead of catching the bus to school, he went to sit in Westfield Park. Then, at a time he knew the rest of his family would have left the house for the day, he returned home. He was captured on the closed-circuit recording system of his neighbor.

Andrew went to his room, took off his uniform and put it in the washing machine. He hung his blazer on the back of a chair, changed into his regular clothes, picked up his wallet, keys, and PSP console (though not the charger) and put them into a type of cloth satchel—covered in patches of bands, obviously—eternally beloved by young rock fans. He left the house at 8:30 AM and began to walk in the direction of Doncaster Railway Station.

En-route, he stopped at an ATM and drew out £200 [$260] of the £214 [$278] in his account. This is the last time his account has seen a withdrawal since that day, though in the years since his disappearance his parents continue to top it up. Strangely, he’d left £100 [$130] of birthday money in his bedroom back in Balby. At the station, he bought a one-way ticket to London, despite the clerk informing him that, for less than a pound extra, he could get a return. He got on the train at 9:35 AM. He got off at 11:20 AM. He was captured on a King’s Cross security camera at 11:25 AM. Though there was a sighting of a boy who looked like Andrew in Pizza Hut on Oxford Street later that day—one his parents believe is credible—this would be the last confirmed sighting of Andrew Gosden.

If you’re wondering why more security camera footage of Andrew in one of the world’s most surveilled cities doesn’t exist , so was Kevin, until he learned the police hadn’t reviewed the King’s Cross footage until a month after Andrew’s disappearance. Nobody had ever requested footage from the train station nearby. By the time anyone did, the trail was cold. Just two examples of mistakes in an investigation that is littered with police errors and terrible luck.

Andrew didn’t have a cell phone (“He had a couple aged ten to 12,” says Kevin. “He managed to lose them, never used them much to begin with, and our offers to replace them were met with, “Can I have an Xbox instead?”). The house had one computer, a laptop, a birthday present for Charlotte, but she’d only had it for eight weeks prior to Andrew’s disappearance. Kevin says Andrew didn’t have an email address. The police took the computers from Andrew’s school and from Doncaster Library —they found nothing. Sony confirmed he didn’t have an online account on his PSP. He had no social media; “he just didn’t seem very social,” Charlotte told the Thin Air podcast last year.

Though his parents are religious, Andrew stopped going to church 18 months before his disappearance. He was a Cub Scout, though stopped attending a few months prior to September 14. That summer, his parents had suggested he stay with his grandmother in London, but he didn’t want to go. “Andrew was-slash-is very deep,” says his father. “He was the sort of person who would listen a great deal but not say much. When he did say something, it was generally worth listening to. He’d obviously thought about it a great deal from several different angles before reaching his conclusion… 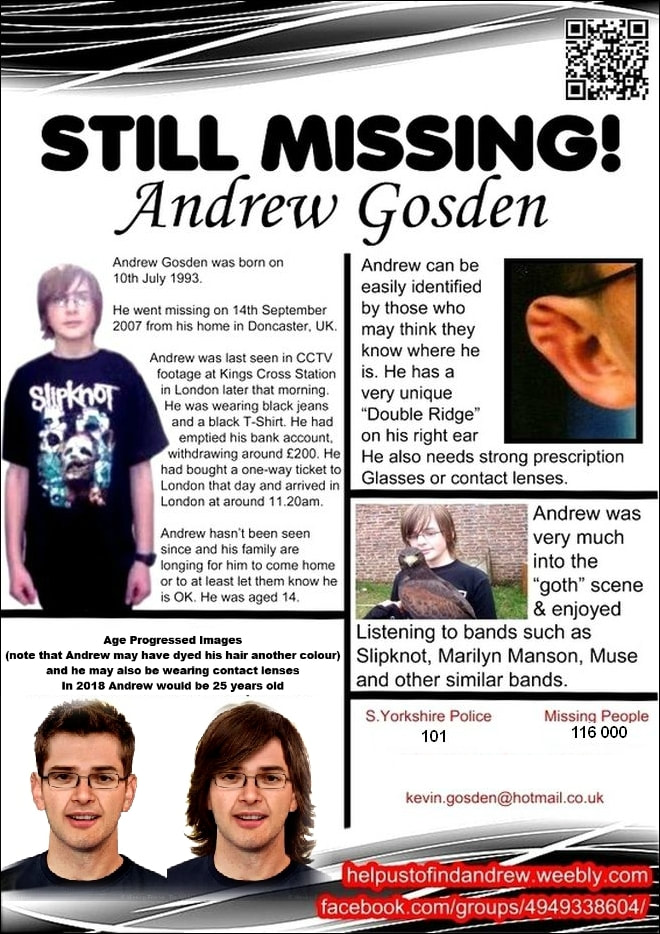 Andrew Gosden was born on July 10, 1993. He lived in Balby, Doncaster, a suburb of the English South Yorkshire town that is largely unremarkable, save for the fact that the classic BBC sitcom Open All Hours was once filmed there. Andrew was smart. He was a member of the Young, Gifted, and Talented program, a scheme designed to enhance the educational development of the top 5 percent of schoolchildren. Teachers at McAuley Catholic High School believed he was a shoe-in for Cambridge.

“Andrew was too clever,” remembers Kevin. “He tended to say little about school, but we remember him coming back from summer school for gifted and talented kids, and he was absolutely enthused about what he had been doing. To be honest, I think Andrew saw school as something you sort of had to do just in order to have choices open to you for adult life.” 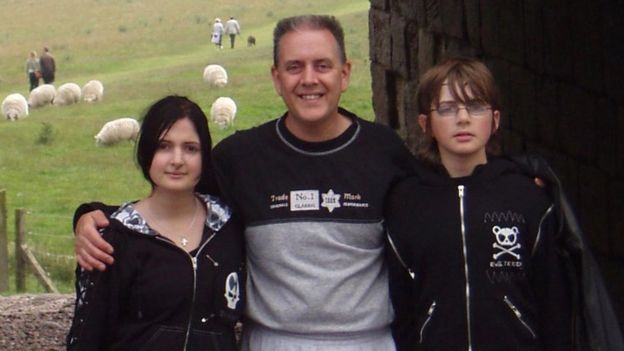 Andrew had friends, but he didn’t socialize with them all that much outside of school. Nothing suggests he was bullied. There was no evidence of depression. He liked his own company. He loved video games. He never left the house without leaving a note. Kevin says he was especially close to his sister, Charlotte, two years his senior. They both shared an interest in the sort of bands.

In November of 2008, a man visited Leominster Police Station out of hours, professing, via intercom, to have information about Andrew. By the time someone had come to take his information, the man had disappeared. After the BBC featured the Andrew Gosden case on The One Show, the BBC received an anonymous letter from someone claiming to be the man from Leominster Police Station. It claimed that Andrew had been sighted in Shrewsbury. There is no confirmation the person who wrote the letter and the man at the police station are one and the same.

Since Andrew’s disappearance there have been dozens of unconfirmed sightings from across the UK.

The family believe the most plausible place him at Pizza Hut on Oxford Street on the day he went missing and later in Covent Garden.

He is currently the face of the Missing People charity’s Find Every Child campaign, with his parents and sister appearing in countless TV and newspaper appeals.

Andrew’s father has described South Yorkshire Police’s handling of the investigation as “too slow, too chaotic and disorganised”.

Mr Gosden said it was the family who found CCTV from a neighbour’s house of Andrew walking towards the station on the morning he went missing.

But there have been a lot of theories. Till this day he is still missing..

More than 135,000 individuals were reported missing in England and Wales in 2015-16, some on more than one occasion.

Nearly 80% of cases are resolved within 24 hours and the vast majority within seven days – only 2% of people go missing for longer than a week.

There are currently about 3,000 people in the UK who have been missing for more than 10 years.