This is one of the most talked about rooms in the Asylum.

“I’m not sure where it all started, but… Lily talks,” explained Zach McCormick, former TALA tour guide and paranormal enthusiast.

The most popular area on the first floor is Lily’s Room, located in the eastern corner of Ward Four, a “step” between Ward One and the older Civil War section. The staff has turned this room into a sort of shrine to their resident spirit, honoring her life and memory.

Legend has it that Lily was a little girl who spent all or most of her short, sad life inside the walls of Trans-Allegheny Lunatic Asylum. Some believe she was dropped off at the hospital, like an unwanted stray, by parents who couldn’t or wouldn’t care for her. Another story has it that she was born at the hospital shortly after her mother was committed, taken in and cared for by hospital staff until she died tragically of pneumonia at the age of nine. After her death, her spirit remained inside TALA, the only home she had ever known.

The most active of all the ghosts in the hospital, Lily likes to play games with visitors and has become especially close to some of the current guides. Her room is a cheery yellow, one of the brightest in the building, although the peeling walls and broken window glass remind you that no living soul occupies this space; and the iron bars on the windows are a stark reminder of the bygone realities of asylum life.

The room is stocked with a variety of toys, including a pink-and-white music box with a miniature ballerina turning point to a tinkling lullaby when the box is opened. The music box sometimes decides to play on its own.

Other items, such as baby dolls and plastic bouncy balls, are scattered about the room. These toys, set out as an invitation to play, have been known to move by themselves or in response to commands. Lily will, on occasion, roll the ball back and forth with visitors in an eerie game of catch. Lily seems to delight in these ghostly play dates and visitors often hear her giggles — equal parts sweet and spine-tingling — echoing down the halls.

TALA guides have developed a special protective bond with the girl’s spirit, demanding that she be treated with kindness and respect. Lily remembers and favors frequent visitors, interacting with them in specific ways. Paranormal investigator Aaron Sulser has investigated the asylum a dozen times. He claims one of Lily’s favorite games involves the music box and flashlights.

During a recent session Aaron asked Lily if she remembered him, and if so, to please make herself known. He placed flashlights in different areas of the room, set up so that a slight twist on the top would turn them on or off. Aaron wound the music box and began asking questions. A flashlight turned on, indicating Lily was there. As the music slowed the flashlight dimmed, only to return to full brightness when the music box was wound again. This occurred several times throughout the session. When Aaron asked if Lily was making it happen, he got a positive response. The correlation between the music box and the flashlight was so consistent, Aaron had no doubt Lily was manipulating it. 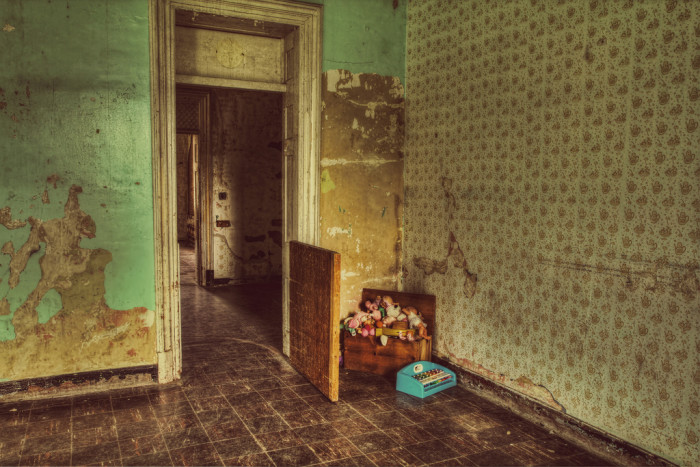 Myth or mystery, what does remain is the evidence, the accounts, the EVP’s all suggesting that a small female child who goes by the name Lily roams the halls of the Trans Allegheny Lunatic Asylum, making her shy and yet playful self known to visitors who come to meet her. Lily speaks, and as long as she has something to say, we will listen, regardless of her terrestrial origins.

(Excerpted from America’s Most Haunted: The Secrets of Famous Paranormal Places, Berkley, 2014, by Eric Olsen and Theresa Argie)